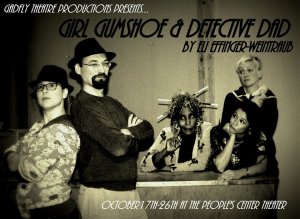 Directed by Immanuel Elliott, it stars one of my new friends G Zachariah White, as well as Lauren Diesch, both in the title roles. They were so terrific, as were the others in the company: Kathryn Fumie as the girlfriend Girl Gumshoe is moving in with, Fawn Wilderson-Legros as the manager of the building across the courtyard, and Kate Kunkel Bailey as Girl Gumshoe’s mother.

It’s queer theater most definitely, but it’s far more about growing up, empty nesters, and what makes a family. These people acted their hearts out, and I loved the surprises that felt so natural at the time. I think you guys should go see it! The show has a ‘pay as you can’ option, which I appreciated so much. Here’s where you can get tickets: