Skip to content
Posted on March 2, 2015 by haddayr Posted in Uncategorized

I hope I’ll be seeing some folks at MarsCon this weekend! Beyond toting around a kid who will be gaming, here is my schedule:

Traditionally capricious and dangerous, the fey are now often portrayed very differently. Why have we moved toward a purely cuddly and kindly fey? What authors are bucking the trend to draw on the more traditional characteristics and who does it well? Why does this work? What purpose do tales of the dark fey serve? Why should we “stay on the path”?
With: S.N. Arly, mod.; William Alexander, Haddayr Copley-Woods, Catherine Lundoff, Kathryn Sullivan

Animals play various roles in fantasy literature. Some behave naturally. Others have magical powers or are magical beings. What are the advantages and pitfalls of animals as characters? Which books really get it right?
With: Kathryn Sullivan, mod.; Eleanor Arnason, Ruth Berman, Haddayr Copley-Woods, Ozgur K. Sahin

We’re a couple of seasons into the adventures of Abbie and Ichabod and their valiant crew. The show has a diverse cast and a diverse fan base with deeply held opinions on what works and what doesn’t. Let’s get together and discuss.
With: Catherine Lundoff, mod.; Haddayr Copley-Woods, Joellyn Ackerman

Is there a difference between these two arts, and if so, what is it? While they are often lumped together, are they really that closely related? What skills are absolutely essential to storytelling but useless to story writing and vice versa? What is the difference between the markets these two arts aim for? What are the advantages/disadvantages of one over the other? What tools or methods are out there for refining your storytelling skills, and how do they differ from writing? Skill, talent, both, neither?
With: S.N.Arly, mod.; Haddayr Copley-Woods, Michael Merriam, Susan Woerhle 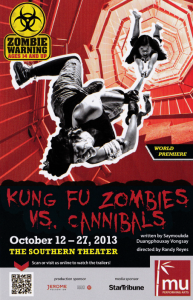 Mental illness for many communities is often explained as demonic possession. Beliefs like this stem from centuries of folklore about demons, ghosts, monsters, and witch doctors. I want to talk specifically about refugee communities and the second installment from my Kung Fu Zombieverse anthology of stage works.
With: Saymoukda Vongsay, presenter