Skip to content
Posted on November 3, 2014 by haddayr Posted in Uncategorized 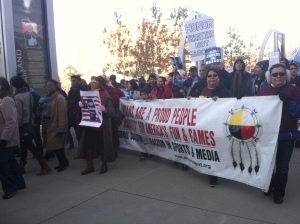 I was so honored and delighted to be among thousands of multi-ethnic people in Minneapolis protesting the Washington team’s horrible, hateful, racist nickname today, with my two young sons (their father has a broken toe, so he participated by providing very necessary drop off and pickup.)

I’ve been a little bothered by some of the news media describing traded insults between protestors and football fans. I didn’t see any of the protestors attempting to engage the fans at all. One Washington fan looked at my Tshirt that imitated their logo with “Rename” instead of “R*dsk*ns” and he opened his coat on this cold morning to grin at me and show his R*dsk*ns logo, leering in challenge. Do I need to point out that he picked the obviously disabled white woman to do this with and what sort of bravery that took?

I gave him a big smile and said: “Hello!” and he stammered and said, “Um, hello” and ran into the stadium.

That was the ugliest interaction I saw.

What it really was: many different nations of Natives coming together (with other supporters of all different races): Ojibwe, Sioux, Lakota, Dakota, Mexica, Ho-Chunk. Many more, I am sure. Those are just the ones I spotted. Speaking out about their culture and their suffering at the hands of men in Washington. Praying together for peace and respect. Singing songs, holding signs, greeting one another. Talking about how much this horrible racist nickname damages them.

A bunch of Vikings fans watching us as we gathered, many giving us thumbs-up. Some looking intensely uncomfortable but not engaging. Lots and lots of cops taking pictures and saying hello. Nervous-looking staff at TCF Stadium.

Thousands and thousands of us.